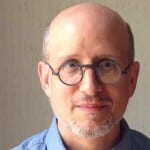 David Wolfson is a composer, music director, arranger, pianist and copyist who lives in New York City. He graduated from the Cleveland Institute of Music in 1985, and in that same year was the first recipient of the newly established Darius Milhaud Award and won the Bascom Little Fund’s Musical Theatre Composition Competition for his short opera Rainwait. After many years attending the school of hard knocks, he transferred to Hunter College, graduating with an MA in music composition in 2013, and in 2018 was granted his PhD in composition by Rutgers University.

His compositional output has included music for dance and trans-disciplinary performance and incidental music for plays; opera, musicals, children’s musicals and comedy songs; song cycles, chamber music and music for orchestra; and one memorable score for an amusement park big-headed costumed character show.

Use this form to send David Wolfson a secure email. If inquiring about a specific piece of music, please indicate the title and, if applicable, the name of your group.